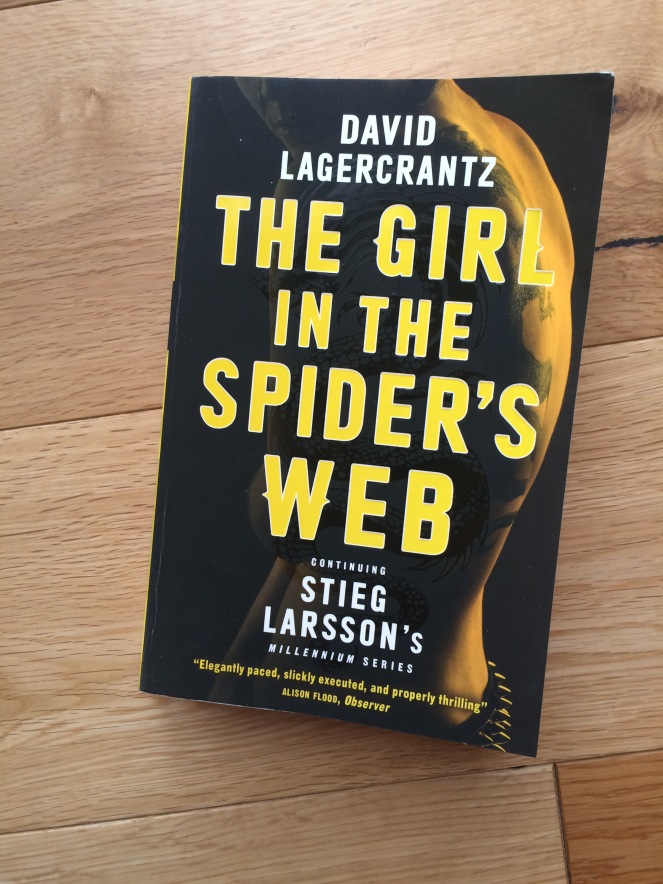 Having read and LOVED the Millennium Trilogy some time ago it is no understatement to say I had mixed feelings about this book, reservations for sure but intrigue compelled me to eventually pick it up and am I glad I did!

Lisbeth Salander and Mikael Blomkvist have not been in touch for some time.

Blomkvist is contacted by renowned scientist Professor Balder.  Fearing for his life, but more concerned for his son’s well-being, Balder wants to publish his story.  But more interesting to Blomkvist is Balder’s connection with a certain female superhacker.

It seems that Lisbeth Salander, like Balder, is a targer of a gang of ruthless cyber criminals which soon brings terror to the streets of Stockholm, to the Millennium team, and to Blomkvist and Salander themselves.

My concern, shared by many I suspect was simply could David Lagercrantz do justice to the Millennium series, should the story have continued after the death of Steig Larsson? Would it work?  And you know what, for me it really did.  The writing style is similar with the detailed story line coupled with great characterisation reminiscent in the original books.  Familiar characters return including Erika Berger, Inspector Bublanski and Holgen Palmgren to name a few.

And the story, well who can better say than Blomkvist himself?

‘…about a new world surveillance and espionage, where the boundaries between the legal and the criminal have been erased’

For me this had everything I had hoped for, an excellent crime story with well developed characters driving it, amplification of the backstory of Lisbeth Salander authentically linking in with the current circumstances and the Millennium publication at the nucleus striving for independence, the truth and social justice.  And an ending which made me smile.

A five star read, best read I think, in a tight time frame to do the comprehensive plot justice.  Looking forward to the 5th in this series, The Girl who Takes an Eye for Eye out in September 17.

4 thoughts on “Review – The Girl in the Spider’s Web”