Welcome to my stop on the Rocco and the Nightingale blog tour hosted by Dome Press.  I am delighted to be part of this, particularly as I have now found a new crime series to enjoy!

The fifth in the series and the first to be published by Dome Press, set in the early 1960’s in rural Picardy in Northern France this was a pleasing read with a strong plot and cast of colourful characters.

Inspector Lucas Rocco is back…

When a Paris street criminal is stabbed to death near the village of Poissons-les-Marais, in rural Picardy, it seems just another job for Inspector Rocco.  But the Interior Minister in Paris has other ideas, ordering him off the case to babysit a Gabonese government minister on the run after a coup.

Rocco reluctantly complies – though he can’t resist keeping a hand in the murder case.  Then he hears that a top international assassin known as the Nightingale is on his way to Picardy with orders to kill a cop.  The trouble is, nobody knows what the mysterious Nightingale looks like, or when he will strike.

Rocco is an expert at keeping others alive.  But this time he’s going to have his work cut out.  Because the cop in question is himself.

Sitting comfortably between a crime thriller and a police procedural this was a charming read in keeping with the time – 1964 – no mobile phones, no world wide web, just good old fashioned footwork and landlines.  This, coupled with the rural location gave the book a nostalgic community feel with a cast of warm and likeable characters; Lucas Rocco at its core.  An affable police inspector, relocated from Paris as part of a nationwide initiative to spread investigative powers around the country, Rocco has a sharp mind and warm heart, which makes for an engaging combination in this crime fiction.

A fantastic opening chapter, a murder which draws Rocco and the reader in, only for Rocco to be reassigned to a security role protecting a Gabonese displaced minister.  Rocco can’t resist the murder investigation and applies his investigative skills to support the investigation, whilst drawing on old contacts to help him join the dots to what appears to be gang related activity, with Rocco as a target.

With a steady pace and some twists along the way, Rocco’s security detail becomes drawn into the investigation and the assassin closes in.  Told in the third person narrative the majority of the story focuses on Rocco’s activities with interspersed chapters detailing the activities and intentions of the assassin.  With this added layer of tension the reader was in the unique position of knowing more that Rocco as he doggedly pursued leads in the good, old fashioned method of policing.

A very well written book that reads like a classic detective story this comes highly recommended from me but do check out the rest of this blog tour.  As stated previously Rocco and the Nightingale is the 5th book in the series.  It was my first and it read fine as a standalone although I will be seeking out the other Rocco books (in order) as I very much liked the emphasis on engaging characters, crime and policing which formed the foundations for this book.

You can buy your copy here direct from The Dome Press.

And now for something really special, Adrian Magson has shared with us an insightful piece about writing style, ‘Voice’.

It’s All in the Voice

You often hear of authors talking about ‘voice’. This might seem odd to a reader, when the only voice they hear is the one in their head. We as writers cannot give them the sound of a specific character’s voice, because each reader builds their own, in the same way as they do scenery, setting and faces. And the voices they ‘hear’ will be different for each character, as indeed they should. The human brain is very clever that way.

For writers, however – certainly this one – ‘voice’ can be a little distracting. By that I mean the voice of another writer working in the same genre as me. It’s not just the sound attributed to his or her characters, but includes the writing style, the flow and rhythm of their words, the construction of sentences.

To better explain this, as a child I had the undoubtedly irritating habit of taking on local accents. Our family moved around a bit, so in various parts of Norfolk and Suffolk, I developed an appropriate burr, while in north Wales… well, it became very Welsh. I thought I’d lost this habit, but some years ago, after an extended phone conversation with a Swedish friend, my wife told me I’d been sounding more and more like the Swedish Chef from the Muppets.

Thankfully, my friend hadn’t noticed or, if he had, was too polite to mention it.

It’s no surprise, then, that when working on a book, I’m always wary of reading anything in the same genre because I don’t want my style and construction – my voice – to take on any elements of another author’s work.

That’s not to say I never read spy thrillers or crime novels (which are the two genres in which I work) because that would be a waste of good reading time, and there are some truly excellent and enjoyable books out there that I have no intention of missing if I can help it.

As a timely example, while working on my latest crime novel, ‘Rocco and the Nightingale’, the fifth in the series set in Picardie, France, during the 1960s, I was asked how my books differed from, say, Simenon’s Maigret. The only possible answer was, ‘I have no idea because I haven’t read any.’ And it’s true – I haven’t, in years.

It’s not that I mind my books being compared with Maigret – how could I? But I wouldn’t want to be looked on as if I were trying to be Simenon simply because I write about a French detective.

Instead, I’d like to think I have my own ‘voice’, made up of style, characters, pace, plot construction and all the other elements that make a good read.

Thank you Adrian, this truly is insightful and very helpfully explained. 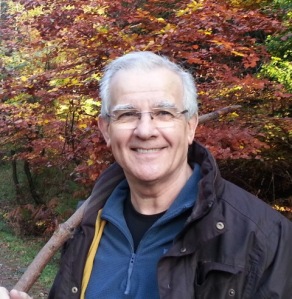 Hailed by the Daily Mail as “a classic crime star in the making”, Adrian Magson’s next book is Rocco and the Nightingale (The Dome Press – October 2017). This is the fifth in the Inspector Lucas Rocco series set in France in the 1960s.

Before this, Adrian had written 21 crime and spy thriller books built around Gavin & Palmer (investigative reporter Riley Gavin and ex-Military Policeman Frank Palmer) – “Gritty and fast-paced detecting of the traditional kind, with a welcome injection of realism” (The Guardian); Harry Tate, ex-soldier and MI5 officer – “fast-paced, with more twists and turns than a high-octane roller coaster” (New York Journal of Books); Inspector Lucas Rocco (crime series set in 1960s Picardie) – “Deserves to be ranked with the best” (Daily Mail), “Captures perfectly the rural atmosphere of France… a brilliant debut” (Books Monthly); Marc Portman (The Watchman) – prompting one reviewer to write: “the most explosive opening chapters I have read in a long time. Give this man a Bond script to play with!”; investigators Ruth Gonzales and Andy Vaslik – “Magson takes the suburban thriller overseas and gives it a good twist. [Readers] will happy get lost in the nightmare presented here” (Booklist Reviews).

Adrian also has hundreds of short stories and articles in national and international magazines to his name, plus a non-fiction work: Write On! – The Writer’s Help Book (Accent Press).

Adrian lives in the Forest of Dean and rumours that he is building a nuclear bunker are unfounded. It’s a bird table.

Thank you once again to The Dome Press and Adrian Magson for having me on this blog tour, it has been an honour and a pleasure!

Last week I participated in a lovely readalong of Excellent Women by Barbara Pym. I’m starting to collect these editions, I’ve read half of my collection (I have 4)! And the books are a delight to read, the quality of paper sublime!
GIVEAWAY
Let the birthday celebrations begin… it’s a week long celebration ok??
October is Black History Month and this is a selection of the books that have educated and informed me. Hard reads and sad as the inequality, cruelty and injustice is exposed.
*Ad/Pr Product - Gifted*
The much anticipated Barbara Pym - Excellent Women readalong starts tomorrow? Any late joiners? Very relaxed and informal - just read and chat!!!
Loading Comments...
%d bloggers like this:
%d bloggers like this: