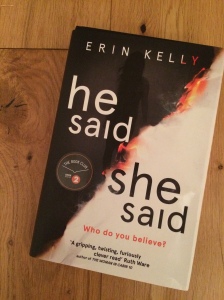 A book high on my reading list as soon as it was released having been so impressed by The Poison Tree when I read it some years back.

He said it was consensual

The Woman said nothing

But Laura saw it…

In the hushed aftermath of a total eclipse, Laura witnesses a brutal attack.

She and her boyfriend Kit call the police, and in that moment, it is not only the victim’s life that is changed forever.

Fifteen years on, Laura and Kit live in fear.

And while Laura knows she was right to speak out, the events that follow have taught her that you can never see the whole picture: something – and someone – is always in the dark…

Told in the first person narrative from the perspectives of both Laura and Kit in the present day but also flashing back 15 years to the original incident.  I loved this book, I enjoy books told from varying time and person perspectives and this book did it well.  A crime is committed, it is her word against his, there are no witnesses, Laura arrives in the aftermath and is certain about what she saw and is subsequently called upon to give evidence in court.  Set against the backdrop of the 1999 solar eclipse over Cornwall the interest in future eclipses draw the key players together.

I was particularly impressed with how the author convinced me how the story was going to play out, only for there to be a major twist which changed everything and while I thought I may have spotted the twist I wonder now if this was only as more secrets and lies were alluded to.  The characters were convincing throughout with a particularly well written female character Beth, who was so skilfully written my feelings toward her responded exactly as the author wanted them to!

I enjoyed the illusion of domestic bliss, built on shaky foundations of life changing lies, small at the time but gathering a destructive momentum.  The context of the solar eclipse and the ‘eclipse chasers’ made me want to find out where the next eclipse would be and head for the sun!

A great read for me to end the year on a high note!