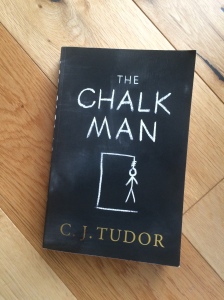 A lucky book win for me, which I was delighted about, especially as this book is generating a lot of excitement across social media.

Looking back, it all started on the day of the fair and the terrible accident.  When twelve-year-old Eddie first met the Chalk Man.

It was the Chalk Man who gave Eddie the idea for the drawings: a way to leave secret messages between his group of friends.

And it was fun, to start with, until the figures led them to the body of a young girl.

That was thirty years ago and Ed thought the past was behind him.  Then he receives a letter containing just two things: a piece of chalk, and a drawing of a stick figure.

As history begins to repeat itself, Ed realises the game was never over…

Everyone is guilty of something

And children are not always so innocent

This was a compelling read, part coming of age, part murder mystery.  If it hadn’t been a couple of days before Christmas this could easily have wiped out a day or so and been read in one go, but I couldn’t, I stayed strong and shopped and wrapped presents and read this over 3 days instead!

With a strong plot, told in the first person by Eddie in the present time and telling the story of 30 years ago, when a girl was found dead and chalk drawings were cropping up around town seemingly accompanying violent and tragic events.  This book had lots going on, the spectacle of childhood, small town vibes and dramas, homelife secrets and lies and of course love and hate.  Told from the perspective of Eddie at 12 this worked well, detailing the things children know, that adults are too busy to notice made the story authentic, there was a lot happening but often in children’s lives there is, enhanced by a vivid imagination.  Aspects of the story were shrouded in an air of  sinisterism, again this was the skilful use of the story being told from the perspective of a child, whereby many people and actions can feel creepy or dangerous.

This was a superb debut by C J Tudor which comes highly recommended by me, it had everything I love in a book, a great plot, lots of detail, but importantly to me was the conclusion which plausibly revealed the mystery.  There were a few questions remaining, but in a good way, we can’t always know exactly why people behave the way they do, what there intentions may be and in a book I can certainly live with that.