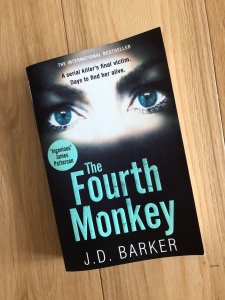 TWO DAYS TO SAVE HER…

They’ve found the killer.  The killer that Detective Sam Porter has been hunting for five years.  But it’s too late to put him behind bars.  He’s already dead.

ONE DAY TO SAVE HER…

But even death can’t stop this murderer.  His last victim is still alive, struggling to escape and the police have no idea who or where she is.

Now Sam Porter must race against time, as her chances of survival slip away, to stop this serial killer from claiming his final victim…

With echoes of the films Se7en and Silence of the Lambs, The Fourth Monkey is a rollercoaster-paced reading experience which will have you white-knuckling the pages at every heart-pounding twist and turn.

Having seen great reviews of this book from trusted book folk over on Instagram I knew I was keen to read it.  And ladies and gentleman, those trusted book folk got it right again, this is one hell of a read and better still it is the first in the series.

When a man is found dead several items on his person indicate he is the hunted killer known as 4MK.  An exciting and original start to this book which proceeds with the hunt for the final victim, likely to be kept alive somewhere, based on the killer’s modus operandi.

Several key characters make this an entertaining and intriguing read, namely Detective Sam Porter, troubled and off work at the time of the killer being found dead.  As the reader we don’t know what the problem is but as the story unfolds all becomes clearer.  Committed to the job and particularly the pursuit of this killer, Porter returns to work hoping to find the eighth and final victim of 4MK before it is too late.

Alongside this investigation is a diary account found on the body of the deceased.  This account reveals a series of events during childhood which offer a startling insight into the psyche of the author – presumed to be the killer.  Some truly shocking moments in this first hand narrative made me pause to take stock.

With the exception of the diary, the story is written in the third person.  Fast paced with a terrific plot this was hard to put down.  Reminiscent of Pierre Lemaitre featuring some truly gruesome moments, fine by me as this is a book about a serial killer after all.  Unpredictable, twisty and clever are words best used to describe this book and I loved it.  A satisfying conclusion to this investigation with some rough justice thrown in and a wide opening for book 2 – The Fifth to Die, out this summer – personally I can’t wait!

Thank you to HQ Stories for sending me a copy of this book.

J. D. Barker is the international best selling author of Forsaken, a finalist for the Bram Stoker Award for Superior Achievement in a Debut Novel.  In addition, he has been asked to co-author a prequel to Dracula by the Stoker family.  Barker splits his time between Englewood, Florida and Pittsburgh, Pennsylvania.