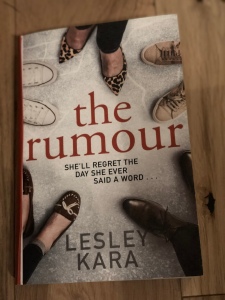 When single mum Joanna hears a rumour at the school gates, she never intends to pass it on.  But one casual comment leads to another and now there is no going back…

Rumour has it that a notorious child killer is living under a new identity, in the small town of Flinstead-on-Sea.

Sally McGowan was just ten years old when she stabbed little Robbie Harris to death forty-eight years ago.  No photos of her exist since her release as a young woman.

So who is the supposedly reformed killer who now lives among them?  How dangerous can one rumour become?  And how far will Joanna go to protect her loved ones from harm, when she realizes what it is she’s unleashed?

Firstly a very happy publication day to Lesley Kara on her debut novel The Rumour.  I was lucky enough to hear the author speak at a recent Transworld event (discussed here)and her talk definitely whetted my appetite for this book.

The Rumour plays on the fascination we all have about child killers, the disproportionate amount of media attention lavished on these killers and their victims, the notion perhaps that this is the image of true evil?  Think the James Bulger killers and the wrath that continues to surround them, despite the knowledge of the boys own abusive early years.

So, in The Rumour, Joanna hears that notorious child killer Sally McGowan may be living in her small town under a new identity, only 10 years old when she committed the crime, forty-eight years later her name still evokes curiosity, anger and animosity.  New in town and keen for herself and her son to fit in, Joanna repeats the rumour she has heard and then watches with regret as it gathers momentum.

Hearing the author speak I felt this book had a strong and original premise, 60 pages in I was curious as to where the story was leading, 80 pages in and I was hooked.  The writing is engaging and easy to read and while there were a number of ‘school mums’ I needed to keep track of, the author uses cues to remind the reader of the role of key characters.  The book is written in the first person narrative of Joanna, interspersed throughout the book are brief narratives of the voice of Sally McGowan, which adds a degree of tension.  Through news articles accessed by Joanna, the reader learns more about the renowned killer, this combined with Joanna’s journalist boyfriend’s interest in the rumour creates a portrait of Sally, past and present.

A difficult book to review without spoiling, but what I will say was that like Joanna, I was viewing other characters suspiciously, could they be the notorious child killer?  The book was clever in terms of how it evolved and the plot encompassed everything I hoped it would with its’ central theme of an infamous killer living among this small and close knit community.

Out today – December 27th this book with a great premise lives up to its expectations and is the perfect thrilling tale for these dark winter nights.

Thank you to Transworld Books for inviting me to their recent Crime Fiction Showcase, where I picked up a proof copy of this chilling read.

Will you be reading The Rumour?  Tell me in the comments and as always thanks for reading.

Last week I participated in a lovely readalong of Excellent Women by Barbara Pym. I’m starting to collect these editions, I’ve read half of my collection (I have 4)! And the books are a delight to read, the quality of paper sublime!
GIVEAWAY
Let the birthday celebrations begin… it’s a week long celebration ok??
October is Black History Month and this is a selection of the books that have educated and informed me. Hard reads and sad as the inequality, cruelty and injustice is exposed.
*Ad/Pr Product - Gifted*
The much anticipated Barbara Pym - Excellent Women readalong starts tomorrow? Any late joiners? Very relaxed and informal - just read and chat!!!
Loading Comments...
%d bloggers like this:
%d bloggers like this: