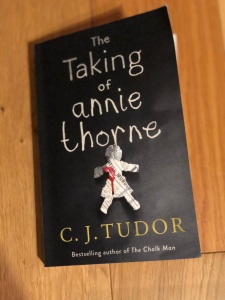 One night, Annie went missing.  Disappeared from her own bed.  There were searches, appeals.  Everyone thought the worst.  And then, miraculously, after forty-eight hours she came back.  But she couldn’t, or wouldn’t, say what had happened to her.

But something happended to me sister.  I can’t explain what.  I just know that when she came back, she wasn’t the same.  She wasn’t my Annie.

I didn’t want to admit, even to myself, that sometimes I was scared to death of my own little sister.

The eagerly anticipated 2nd book by C J Tudor has arrived and I am delighted to be on the blog tour.  Special thanks to Jenny Platt at Michael Joseph for inviting me to be involved and providing me with a proof copy of the book.

I was a fan of The Chalk Man and you can read my review here.  The vibes of this book in my opinion are similar, a nostalgic feel and the writing reminiscent of Stephen King.  All good right!?  So, what’s it all about?  Joe Thorne tells this story in the first person narrative.  His sister went missing as a child and when she returned she was different.  When an anonymous email arrives in his inbox saying, ‘I know what happened to your sister.  It’s happening again.’ Joe is compelled to return to the small mining town where he grew up.  Little has changed including the people and Joe is clearly unwelcome.

The story is told in a then and now format, with Joe as the narrator in the present and the past – 1992 – the time of his sister’s disappearance.  Joe is a somewhat damaged protagonist and his current circumstances are troubling, which added another layer to the story as he is fleeing his current life whilst attempting to resolve things from his past.

A very decent follow up to The Chalk Man, C J Tudor cements herself as a talented writer with original storylines and a wide appeal.  Her books are creepy but not full blown horror, the plot is strong and while the concept of The Taking of Annie Thorne may not be wholly original the finer details I hadn’t guessed.

If you enjoyed The Chalk Man then I think you will like this.  Stephen King states

and actually if you like a strong thriller with a touch of horror then this is definitely for you! 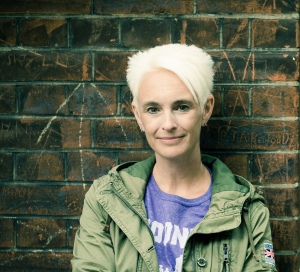 C.J Tudor was born in Salisbury and grew up in Nottingham, and has recently moved to Kent with her partner and young daughter.  Her love of writing, especially the dark and macabre, started young.  When her peers were reading Judy Blume, she was devouring Stephen King and James Herbert.

Over the years she has had a variety of jobs, including trainee reporter, radio scriptwriter, dog walker, voiceover artist, television presenter, copywriter and now, author.

Her first novel, The Chalk Man, was a Sunday Times bestseller in both hardback and paperback and sold in thirty-nine territories.

This is a blog tour so do check out the other posts and please share across social media.