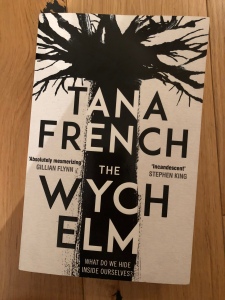 One night changes everything for Toby.  A brutal attack leaves him traumatized, unsure even of the person he used to be.  He seeks refuge at the family’s ancestral home, the Ivy House, home to cherished memories of wild-strawberry summers and teenage parties with his cousins.

But a few days after Toby’s arrival, a discovery is made, a skull, tucked neatly inside the elderly wych elm in the garden.  And soon after a body.

As detectives begin to close in on them, Toby is forced to examine everything he thought he knew about his family, and himself.

First many thanks to the publisher Viking Books for sending me a copy of this book.

My first Tana French novel and I had no real expectations, the blurb, while telling you everything you need to know doesn’t really give a sense of the book.  I had seen some very mixed reviews across social media, although the cover appealed and while reviews can inspire me to pick up a book, they don’t usually put me off!  At just over 500 pages this was a mighty tome and the ideal book to take on a recent short break – based on me only needing to take one book!

As the description says, this is the story of Toby, damaged physically and mentally following a horrendous attack.  When the skull is found the police investigation raises questions that leave Toby unsure of who he really is.  Written entirely in the first person narrative, Toby tells his story.  The book is a slow starter, plunging the reader into Toby’s recollection of what has happened, confident that all will be revealed, I felt very much in the dark at the start and it took a while for the story to really pull together and make sense.

That said I enjoyed this book, a lot.  The book is eloquently written but verbose, for me it was reminiscent of the writing of Donna Tartt, whose books are also substantial and detailed.  A relationship to be savoured more than a fast paced fling!  The characters became familiar, the relationships rich and the plot was comprehensive.  I thought I had worked out the direction the story was going by about the midpoint of the read, I was wrong in the detail but the theme was closer.

In essence this is a troubling story, not a happy one by any means and being a long and slow read this will not be for everyone.  Strong in both plot and characterisation this is a book I would recommend though and currently is one of my favourite reads of the year. Also, the author, Tana French, based on this book alone has to be commended for her superb story telling.

I am keen now to pick up something else by this author, any suggestions?  Thanks in advance.

Tana French is the award-winning and New York Times bestselling author of In the Woods, The Likeness, Faithful Place, Broken Harbour, The Secret Place and The Trespasser.  She has won many awards for her fiction, including the Edgar, Anthony, Barry, Macavity and IVCA Clarion Awards, the LA Times Book Prize for Best Mystery / Thriller and the Irish Book Award for Best Crime Fiction.  She grew up in Ireland, Italy, the US and Malawi, and trained as an actress at Trinity College Dublin before becoming a writer.  She lives in Dublin with her family.