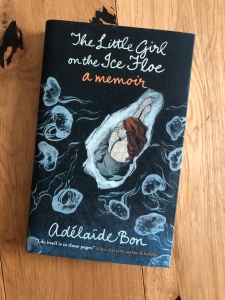 Adelaide Bon grew up in a wealthy neighbourhood in Paris, with a loving family, lots of friends and seemingly limitless opportunity ahead of her.  But one sunny afternoon, when she was nine years old, a stranger followed her home and raped her in the stairwell of her building.  She told her parents, they took her to the police, the fact of the crime was registered… and then a veil was quietly drawn over that part of her childhood, and life was supposed to go on.

Except, of course, it didn’t.

Throughout her adolescent and young adulthood, Adelaide struggles with the lingering horror of that afternoon in 1990.  The trauma pervades all aspects of her life: family, education, friendships, relationship, even her ability to eat normally.  And then, one day, many years later, she receives a call from the police, who think they have finally caught the man who raped her, a man who has hidden in plain sight for decades, with many other victims ready to testify against him.  The subsequent court case reveals Giovanni Costa, the stuff of nightmares and bogeymen, vanquished at last by the weight of dozens of emotional and horrifying testimonies from all the women whose childhoods he stole.

Firstly huge thanks to the publisher; Quercus books for reaching out and sending me a copy of this book, described by them as a, ‘brave and brutal memoir, and an absolutely vital contribution to the #MeToo movement’.  That got me intrigued and I knew this was a book I wanted to read.

The writing is beautiful and haunting, written as a memoir the narrative is interesting, in the most part the writing is in the third person, but occasionally it shifts to the second person as the adult Adelaide speaks to her younger self, the self on a mammoth journey of recovery.  This book is undoubtedly sad as the author describes her relentless journey to recovery following a horrendous rape by a stranger in the shared hallway of her home when she was just 9.

This book isn’t an easy or pleasant read but it is written in a way that makes it highly readable, the writing is broken down into separate paragraphs and the chapters are short.  The theme of this book is the author’s recovery culminating in the trial of her rapist over 20 years later.  The book highlights in some detail the brain’s ability to supress traumatic memories and events, as a protective response, which leaves the individual confused and triggered by seemingly unrelated stimuli – sounds, words, smells.  The result is a lifetime of struggle and the author advocates for better and more skilled support for victims of rape and sexual assault.  She speaks about the lack of specialist knowledge within the caring profession and the unfortunate negative impact this can have in further unrecognised symptoms and correct diagnosis and support.

This is a very important and insightful read, largely divided into 2 halves, the author’s journey to recovery and the trial of the accused.  The trial itself is shocking in terms of the number of victims who came forward and the attitude and behaviour of the accused.

Personally I like non fiction, although the majority of what I read is fiction.  I also ‘enjoy’ writing such as this and am interesting in stories of pain and recovery.  This memoir is beautifully written, shocking in the detail of the pain but also oddly detached which is a reflection of the author at the time.  A painful read but worth reading if this is a genre and subject you are interested in.

Adelaide Bon is a French writer, actress and voice artist.  She graduated from the Ecole Superieure d’Art Dramatique in Paris and completed five years of training on issues of gender equality, learning the techniques of the Theatre of the Oppressed.  She lives in Paris.

Ruth Diver is the winner of the 2016 Asymptote Close Approximations Fiction Prize for her translation of Maraudes by Sophie Pujas.  She was the hear of Comparative Literature of Auckland until 2014.