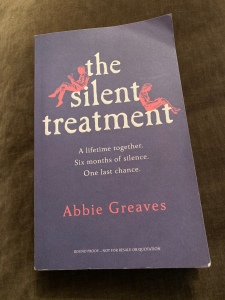 Frank hasn’t spoken to his wife Margot for the last six months.  Not one, solitary sentence, not one single word.  Margot has no idea why.  Well she has plenty of ideas why Frank is choosing not to speak to her but no firm answer.  For six, silent months they have lived under the same roof, slept in the same bed, and eaten every meal together in an increasingly uncomfortable quiet.  To all intents  and purposes, their marriage continues as lovingly as it ever did – only it is playing out in mute.

After an unexpected call tips her world on its head, Frank finds Margot collapsed at the kitchen table, an empty  blister of sleeping tablets by her side.

With the damage unknown, she is placed in a medically induced coma.  Can Frank find the words to explain his withdrawal before it is too late.

The Silent Treatment is a sensitive, sweeping novel that takes us back to the beginning of a relationship to discover what can happen to drive two people apart.

Firstly special thanks to Georgina Moore at Midas PR for sending me a proof copy of this book.  Eloquently written this story is told from Frank’s perspective as he sits by his wife’s silent bedside, recapping their life together culminating in an explanation for his silence.  What is evident throughout is Frank’s love for Maggie, from the first moments of them meeting, however while I enjoyed this beautiful story, I was left feeling it was overwhelmingly sad.

A desperately difficult situation unfolds as this story progresses and Frank is compelled to try to explain to his beloved wife why he has been unable to speak.  What emerges however is secrets on both sides as Maggie and Frank try their very best in difficult circumstances.

Told from Frank’s point of view I enjoyed the love story of Maggie and Frank, which detailed Frank’s devotion to his wife throughout their marriage.  An undisclosed event occurred six months previously and Frank has since that time been unable to speak to his wife at all.  I found this story to be well written, dealing with some challenging issues sensitively.  Thought provoking in so far as I always assumed, ‘the silent treatment’ was an angry, passive aggressive response, not the case here and so for me this led to thinking about cases of mutism and perhaps sometimes simply not having the words to say what needs to be said.

A beautiful but somewhat heart breaking story which unfolds gradually as the pages turn, detailing love and family life, happiness and devastation and everything in between.

Abbie Greaves studied at Cambridge University before working in a literary agency for a number of years.  She was inspired to write her first novel The Silent Treatment, after reading a newspaper article about a boy in Japan who had never seen his parents speak to one another before.

Abbie lives in Edinburgh with her boyfriend and is hard at work on her follow-up novel, The Ends of the Earth.