Crime Reporter Henning Juul thought his life was over when his young son was murdered.  But that was only the beginning…

Determined to find his son’s killer, Henning doggedly follows an increasingly  dangerous trail, where dark hands from the past emerge to threaten everything.  His ex-wife Nora is pregnant with another man’s child, his sister Trine is implicated in the fire that killed his son and, with everyone he thought he could trust seemingly hiding something, Henning has nothing to lose…except his own life.

Packed with tension and unexpected twists, Killed is the long awaited finale of one of the darkest, most chilling and emotive series you may ever read.  Someone will be killed.  But who?

Very late to the party with this series, I hang my head in shame when I say this is the first Henning Juul novel I have read.  Upon discovering this was the 5th book in the series I did contemplate attempting to read the 4 preceding books but given that I had only 2 weeks before my blog tour stop I concluded that even for me that was ambitious, work, family and other commitments…you know.  I am a purist and do like to read books in order, so despite having heard great things about this series it was with some trepidation that I picked up this book.

Great news though, I needn’t have worried.  As soon as I started reading, the writing reminded me of the Millennium Trilogy, both set in Scandinavia, both crime series with comprehensive plots and both (if I recall correctly from the Millennium Trilogy) have a very helpful cast of main characters listed at the start.  Also I do think that while arguably series books are best read in order, I don’t think reading this as a standalone was a huge disadvantage.  Yes there were references to previous events, but not so many to impact on the plot of Killed.

So, my thoughts, Henning Juul a likeable and dogmatic journalist, determined to find the culprits of the fire leading to his son’s death.  Despite clear warnings to back off, this is one investigation Juul cannot leave alone.  Following gossamer thin leads, which I admit I didn’t always know where they were leading, but always driving the story forwards, Juul stays on the trail of the murderers, with some nasty discoveries along the way.  I am a stickler for the small details and in books with intricate plots, typical of Scandi Noir, I have learnt to go with the story, confident all will be revealed in due course.  And it was, with relatively short chapters this was a compelling read, hard to put down at night and easy to pick up when I had a spare 10 minutes.  While clearly plot driven, the characters were engaging and I found myself not having to check the list too often, despite there being a number of key characters.

A gritty crime thriller, for those readers who really like to get their teeth into a book, best read I think over a shorter period to keep on top of the plot, but highly recommended from me…now to get my hands on Thomas Enger’s other books!

Thomas Enger  (b.1973) is a former journalist.  He made his debut with the crime novel Burned (Skinnded) in 2010, which became an international sensation before publication. Burned  is the first in a series of 5 books about the journalist Henning Juul, which delves into the depths of Oslo’s underbelly, skewering the corridors of dirty politics and nailing the fast-moving world of 24-hour-news.  Rights to the series have been sold to 26 countries to date.  In 2013 Enger published his first book for young adults, a dark fantasy thriller called The Evil Legacy, for which he won the U-prize (best book Young Adult).  Enger also composes music, and he lives in Oslo.

This is a Blog Tour and my thanks go to Orenda Books for providing me with a copy of the book for review and Anne Cater for organising.

Do check out the rest of the Blog Tour – 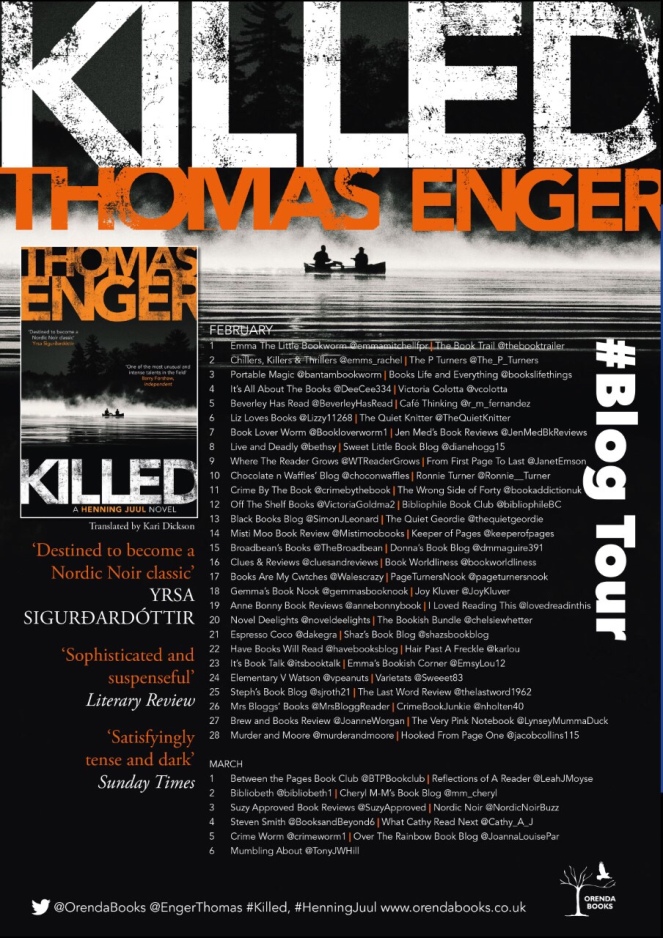